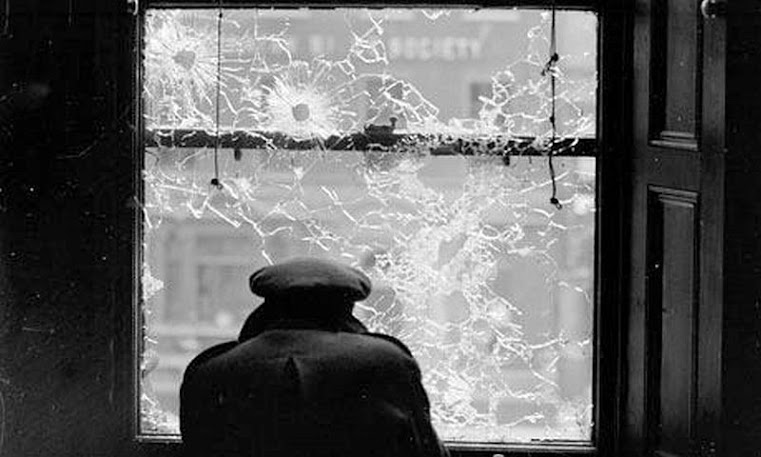 So it's been...well, ages since I've posted anything here and, it being February and all, I've decided to be a bit more diligent this year. Yeah, right...  Still, here are a few pictures from events I did last year for Wolves of Eden. Thanks to all those who hosted me to promote the book, especially Professor Suzanne Matson of Boston College's English Department--Go Eagles!--whose creative writing students were an inspiration to meet and work with. Also, thanks to all those at Powell's Books in Portland, Oregon. If you love books, go there. It's several blocks of books, new and used, curated and sold by them that love and know books. It was a dream to read there. Thanks again, all! Peace in 2020!

The Irish Times published a review of Wolves of Eden in last Saturday's Weekend edition.

Crime Landscapes of US Frontier, Hypnosis, Big Pharma and Galway

Share to FacebookShare to TwitterShare to Email App
Kevin McCarthy’s first two novels, Irregulars and Peeler, were set against the backdrop of the Irish Civil War, but Wolves of Eden (WW Norton, €14.99) opens in the wake of the American civil war, with the psychologically scarred Union Army veteran Lieut Molloy dispatched to Fort Phil Kearny in the Dakota Territory to “put boots on the gallows” – ie, investigate the apparent murder of the fort’s sutler and his wife. Molloy being an alcoholic determined to drink himself to death, the investigation is largely conducted by his second-in-command, Sergeant Kohn; woven through Kohn’s attempts to penetrate the code of omerta that pertains at Fort Kearny is a rambling, semi-literate confession written by Michael O’Driscoll, an Irish immigrant who has served with the Union Army during the recent war.

A compelling tale of men who were “chucked into the roaring flames of history”, Wolves of Eden is superbly detailed in its depiction of frontier soldiering, with Fort Kearny besieged by Chief Red Cloud and the story playing out against the events which led to the Fetterman Massacre of 1866. Flashing with shards of coal-black humour – Michael’s brother Tom, shot in the face at the battle of Chickamauga, has “a face that would make a funeral turn from a main road” – Wolves of Eden is a brutal, blood-soaked and unsentimental account of the Old West that bears comparison with Cormac McCarthy’s Blood Meridian.
Posted by Kevin McCarthy at 04:48 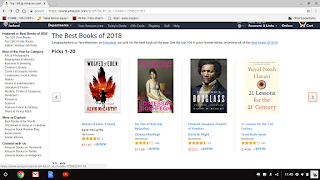 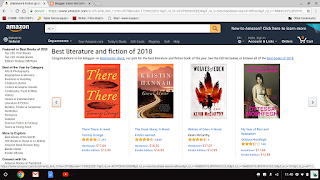 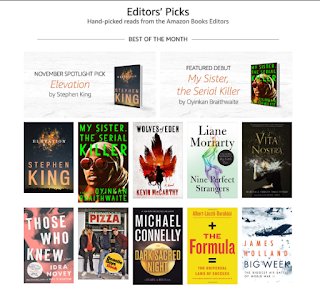 Delighted to announce that Wolves of Eden has been selected as an Editor's Pick for Book of the Month, November 2018 on Amazon. And a real honour to be on the same list as Michael Connolly and Stephen King. I've been reading King since I could read at all and Michael Connelly's Bosch novels were a real influence on my O'Keefe novels.
Posted by Kevin McCarthy at 08:08

The Civil War may be over, but in this thrilling historical novel,the battle for the West is only just beginning...

Dakota Territory, 1866. Following the murders of a frontier fort’s politically connected sutler and his wife in their illicit off-post brothel, Lieutenant Martin Molloy and his long-suffering orderly, Corporal Daniel Kohn, are ordered to track down the killers and return with “boots for the gallows” to appease powerful figures back in Washington.  The men journey west to a distant outpost in a valley at once beautiful and savage, where the soldiers inside the fort—from Irish Fenian rebels to anti-immigrant nativists—prove to be violently opposed to their investigations.

Meanwhile, unable to adapt to life as migrant farm laborers in peacetime Ohio, Irish immigrant brothers and Civil War veterans, Michael and Thomas O’Driscoll, reenlist in the army and are shipped west to Fort Phil Kearny in the heart of the Powder River Valley.  Here they are thrown into ferocious combat with Red Cloud’s coalition of Native tribes fighting American expansion into their hunting grounds.  Amidst the daily carnage, Thomas finds a love that will lead to a moment of violence as brutal as any they have witnessed in battle—a moment that will change their lives forever.

Blending intimate historical detail and emotional acuity, Wolves of Eden sets these four men on a deadly collision course in a haunting narrative that explores the injustice of warfare and the resilience of the human spirit.

“Kevin McCarthy is a fresh voice, and a keen one. This Irish thriller writer has ventured boldly into a new continent and a new history. His place is the American West in the 1860s, when the long sad carnage was winding its grim way toward Wounded Knee. With this story of profound tragedy, his new readers will be many.” -- Larry McMurtry, author of The Last Kind Words Saloon

“When it comes to saturation-level historical authenticity—the sense of being there, alive and at large in the vanished past—I think Kevin McCarthy is in the company of masters like Patrick O’Brian and Hilary Mantel. Wolves of Eden is also a shiningly humane novel...about the immigrant soldiers who found themselves on the front lines during the harrowing seizure of the American West.” --Stephen Harrigan, author of The Gates of the Alamo and A Friend of Mr. Lincoln

McCarthy has a fine sense of voice and period detail, but it's the well-drawn characters and riveting scenes that make this novel memorable.--Kirkus Reviews

Set in late 1866 amid Red Cloud’s War in the Dakota Territory, McCarthy’s third novel is a historically rich blend of mystery, morality, and brutal frontier warfare...Though not for the squeamish, this is a riveting and propulsive mystery.--Publisher's Weekly
Posted by Kevin McCarthy at 05:20

What He Said...Did I Really Say That?

A friend brought this to my attention.  It is the transcript of a reading and Q&A I gave for the Dublin City Libraries Crime and the City series of lunchtime talks last year.  It's very wierd, reading a transcription of what you've said.  There is something of the deposition about it.  Something of the courtroom and something of that feeling you get when you hear yourself speaking on tape...

Listen to me.  On tape...  On video or iphone or ice-bucket challenge or whatever.

Despite how strange it is to read my own rather rambling verbiage word for word, I actually managed to say a lot that I really stand by, especially in the Q&A part where I talk about writing and editing and researching historical fiction.  It's here if you're interested.

Here's me on researching historical fiction.  Apparently I have a 'fraudulent gadfly's knowledge' of the Irish revolutionary period.  Hmmm...someone shut that guy up!:

One of the pleasures of being a historical novelist, one of the pleasures and the banes, I suppose because a lot of the research is really fun to do and it’s really interesting and you wouldn’t write about if you weren’t interested in it in the first place. I’m doing a new novel which is not in this series, although I am going back to this series, I’ve found myself reading the diaries of this Pioneer woman – I’m literally falling asleep reading it and I was thinking why do I have to read this? But you do because the great thing about research is it takes the story in a different direction and quite often you think you have a story set and then you come across like the fact that there were female agents and the story goes in a completely different direction. I love that about research. I tend to research widely first and then go and research for things I need in the story specifically. It’s kind of daunting sometimes. I was on the radio with an historian recently and he had a vast, comprehensive knowledge of the subject and I have kind of a fraudulent gadfly’s, you know a magpie’s knowledge of it because fiction writers research to suit the story as much as anything. I could never write a scholarly treatise on the period. But the research suddenly it will throw something up from the dullest, most banal text and you suddenly think, I have to use that. That’s fascinating. Or what often happens too is your story will be going one direction and something you read will confirm it, you know, I wonder if they would have done that? and then suddenly you’ll just fortuitously stumble upon something – they did do that. Thank God!

http://dublincitypubliclibraries.com/story/kevin-mccarthy-transcript
Posted by Kevin McCarthy at 12:24

Hi folks. An interview with yours truly over on Lisareadsbooks blog.  It was really fun to do, actually, forcing me to think back on my early reading habits, my working (or lack thereof) habits etc. It's a great blog. Check it out here:  http://lisareadsbooks.blogspot.ie/2013/11/kevin-mccarthy-interview.html

Also, I'll be among some real greats of Irish crime writing this Saturday at the Irish Crime Fiction: A Festival at Trinity College. Really looking forward to it.  Details here: http://irishcrimefiction.blogspot.ie/
Posted by Kevin McCarthy at 09:29 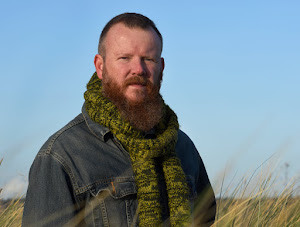 Kevin McCarthy is the author of the highly acclaimed historical crime novel, 'Peeler' (Mercier Press, 2010). Called a '...dark, brooding, morally complex masterpiece...' by the Belfast Telegraph, 'Peeler' was selected by the Irish Times as one of its Top Ten Thrillers of 2010 and as a Read of the Year 2010 by the Philadelphia Inquirer. His short story "Twenty-five and Out" appears in 'Down These Green Streets: Irish Crime Writing in the 21st Century'. Kevin's second novel, 'Irregulars', is published by New Island Books and was shortlisted for the Ireland AM Crime Fiction Book of the Year 2013. His latest novel, 'Wolves of Eden', is published by W.W. Norton and was selected by Amazon as one of its 20 Best Books 2018. He is represented by Jonathan Williams Literary Agency. "It doesn’t matter if you don’t have a strong interest in Irish history – McCarthy writes such an involving, oft-times harsh story that lack of knowledge neither intrudes nor undermines the enjoyment. The contextual mood seems realistic for the times that are portrayed. Depression and disappointment, poverty, prostitution... No pretty pictures are painted and Irregulars is all the better for it."--Tony Clayton-Lea, SUNDAY TIMES 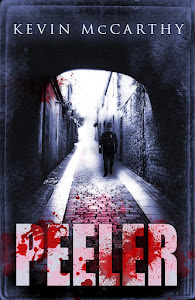 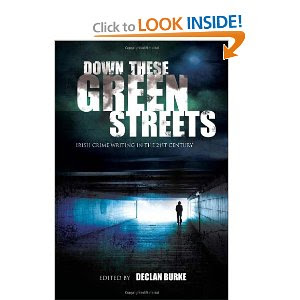 'the energetic, passionate voices evident in this wonderful collection suggest that this is a challenge Irish crime writers, the trawlers and scribes of our mean streets, might well have the talent to meet'--Irish Times